There are a few helpful tips below on how to protect your investment and how to make it less desirable and efficient for someone to grab your converter and resell it. 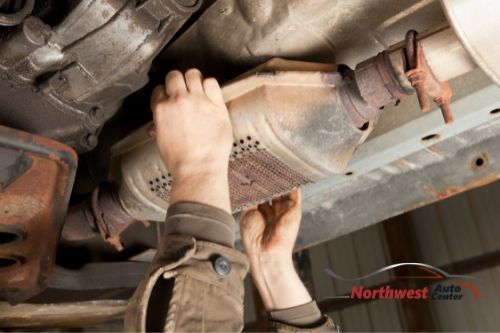 What Does a Catalytic Converter Do?

Catalytic converters have been designed to defend against harmful emissions by turning these pollutants into harmless gasses. There are naturally multiple issues that can arise when you try to drive without having one equipped on your vehicle.

In short, catalytic converters basically act as a filter on a vehicle’s exhaust system. However, it’s not what the catalytic converter does that makes it so valuable to steal and flip for a profit. They’re often high in resale value due to the precious metals that they’re built from.

Why is Catalytic Converter Theft Common?

The real value in catalytic converters is due to the metals, such as platinum, palladium, and rhodium, that have a relatively high resale value on the market. They’re often viewed as a tempting crime for those looking to make some easy cash.

An experienced thief can often remove the converter within a few minutes when equipped with the proper tools. You may run into the grocery store for a few things and come out to a car that now requires an expensive replacement.

What Vehicles Are Most At Risk of Catalytic Converter Theft?

Naturally, newer models have a stronger resale value as they’re often crafted from a higher percentage of precious metals. If you’re unsure about whether or not your car is likely to be targeted, there are a few things that thieves look for.

Taller vehicles, such as large trucks and SUVs, are easier to fit underneath. These are often targeted for theft, simply because the converter is easier to access with less effort.

Low-emission vehicles, such as hybrid cars, are another attractive option for thieves. Usually, the catalytic converters on these vehicles provide a greater amount of precious metals. A thief may deem it worthwhile to target your vehicle if it means they can flip it for more money.

The only vehicles currently that are safe from this form of theft are all-electric models. They don’t require a catalytic converter as they produce no emissions.

Naturally, you want to protect your car and your wallet from having to shell out thousands for a replacement. There are a few quick and easy steps that you can take to avoid becoming a victim of such a frustrating crime.

Once you’ve determined whether or not your car falls into the targeted categories, such as a large truck or SUV, or a hybrid, then you’ll want to take a few extra precautions.

Driving a vehicle without a catalytic converter will lead to a check engine light, a roaring engine, a very load exhaust noise and even an increase in exhaust odors. If you’ve been the victim of this opportunistic crime, bring your vehicle to us at Northwest Auto Center so we can get you back on the road safely.