While your car battery provides the electricity – and jolt – your car needs to start, it doesn’t power your vehicle. That’s the job of your car’s alternator.

In fact, without a properly working alternator, your car isn’t moving anywhere.

Your Car’s Alternator is the Generator 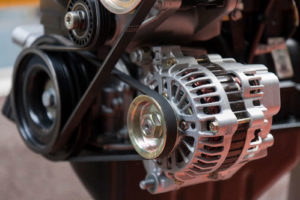 In fact, that was its old name — the generator. And today’s modern alternators work the same way.

After giving the spark the engine needs to get started, the battery relies on the alternator for continued power. As the components, belts and gears spin and crank under the hood, the wheel on the alternator converts this motion into energy. Similar to the mechanism of a hydroelectric dam.

Without the alternator, your car battery will not recharge. And your car won’t be going anywhere — something that doesn’t make anyone’s day better.

Three Signs of a Failing Alternator

With so many components getting power from your alternator, it’s important to keep it in good working condition, or you could find yourself not moving.

Luckily, the alternator is made of up of only a few parts and has a few warning signs that will let you know before it fails.

These days, modern vehicles have warning lights dedicated to most components of the engine — alternator included.

However, the warning light is not the same across all car models. Sometimes, the warning light is shaped like a battery; others show the words “ALT” or “GEN.” But, don’t let the battery light confuse you. This warning appears when the voltage output of the alternator goes above or below it’s pre-set number.

Often, when an alternator issue first develops, the light will flicker on and off as the alternator attempts to self-regulate its voltage output.

Failing alternators mean electrical issues — both the lights on the inside of your car as well as your headlights.

From erratic flickering to dimmer lights to extremely bright lights, all of these are signs that something is not right with your alternator. A working alternator will keep a steady stream of light, no matter what speed you are driving down the road.

Additionally, if you notice your radio getting quieter or your heated seats aren’t getting toasty, that’s also a sign of alternator issues.

A dead battery doesn’t automatically mean a bad battery; it could mean it’s not recharging correctly.

Typically, while driving the alternator provides power, recharging the battery so that the next time you start your car you have the necessary stored power to get going.

If the alternator isn’t correctly working, that means no power to your battery.

However, the same symptoms could be from a weak or dying battery as well. And when your car turns over endlessly before (or instead of) starting, frustration takes over.

Luckily, most Auto Parts stores will test your battery — free of charge. If it’s not the battery, that means its time to head to your local, auto repair shop.

While your battery may get you started, your car’s alternator, or generator, keeps your car going. Responsible for continually providing electricity and power to various parts of your vehicle, without you aren’t going anywhere quickly. Luckily, there are a few key warning signs of a failing alternator that gives you time to get it fixed before you find yourself not moving or without lights.

Need to schedule a repair? Have an alternator or another part that isn’t performing at its best? Contact Northwest Auto of Houston today at 281-894-8880.