These days, you’ll most often see “full synthetic oil” or “synthetic blend” on your oil change receipt. What is that?

Before synthetic, there was conventional oil. Over time, after research and advancing technology, conventional oil has begun to be phased out. So, what’s the difference between the two engine oils? 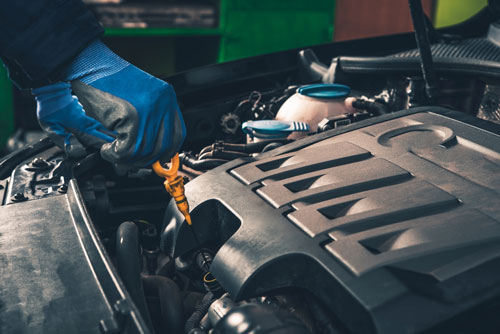 What is Synthetic Oil?

It’s oil, but instead of being just naturally made, it takes a bit of work.

Synthetic motor oil combines a base oil, powder additives, and carrier oil. Both synthetic and conventional oils use refined crude oils, but the difference comes with the artificially made additives and a higher level of refinement found in synthetic oils.

Full synthetic is the purest, with the highest level of refinement for the base oil and additives. However, there is no industry standard, so the levels of refinement range between the different manufacturers. Rarely is anything every fully “full synthetic.”

The benefits of synthetic motor oil are clear. And while synthetic engine oils will cost an average of $5 more per month, it’s worth keeping your engine healthy.

While synthetic oils cost more than their conventional counterparts, it’s not from oil change frequency.

In fact, you can generally go longer between oil changes after switching to synthetic.

Mobil 1 supports oil changes in intervals ranging from 7,500 miles to 20,000 miles when using some of their oils. With that being said, it’s essential to follow still your vehicle’s owner manual or the manufacturer’s suggestion. Not all synthetics are created equal, and not all engines perform the same.

Can My Car Use Synthetic Engine Oil?

Yes. Any vehicle can use full synthetic or synthetic blends. With that being said, depending on your car, a slow change is sometimes suggested.

With high mileage engines that have only ever used convention oils, it is recommended to ease into the switch to synthetic oil. Additionally, older vehicles (made before 1990) may have seals and other components that aren’t as tight as newer models. Because synthetic oil cleans out the engine better than conventional oil, it may remove deposits acting as seals.

When making the switch with older and higher mileage engines, work with your local auto mechanic to form a plan.

Keep in mind that some cars (especially newer models and performance vehicles) require synthetic motor oil. Not sure if that is your car? Check your owner’s manual!

Wondering if the upgrade to synthetic motor oil is worth it? It is! More refined engine oil has significant benefits to your engine, including better cleaning powers and higher performance. So, the next time you’re in the shop for an oil change, ask your mechanic about making the switch.